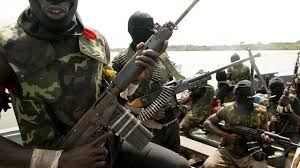 Fear in Aho owukpa village as gun men suspected to be herds men attacked at about 7 to 8 pm last night, adopting a woman and a young man.

The woman adopted is rumoured to be wife of a popular business man, Aaron Gabriel, AKA Randy while the young man is said to be known as Odo Inyanda, all of Ai’ochidu family.

Rumour circulating right now says the  Odo Inyanda  have  escaped but we could not verify this  as at the time of filling the report.

Another young man, Peter Abakpa was seriously wounded that no clinic within Aho region could handle.

The last night attack is coming few days after the cathchist of Ankpa Catholic church was adopted and released for a ransom of 100 thousand naira.

One John Ali, the son of chief Ali John who spoke to our reporter said:

“It was around 8pm when we heard heavy gun shot in our village, women and children ran for safety, the men were more confused as we are not armed. They infiltrated our village with ease, no one could help us!!

They took away Randy’s wife, Odo Inyanda and wounded Peter Abakpa. I can’t find my mother right now and we can’t account for other missing people. We need help from well meaning Nigerians and every owukpa sons and daughters in the military.” John Ali lamented.

We are yet to get police report on the latest Owukpa attack and every effort to reach the PPRO proved abortive.