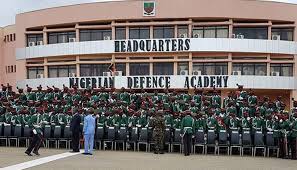 It was also said that the armed men have also abducted two majors, however, reporters cannot verify this independently.

The armed bandits, who were said to have attacked the barracks at about 1 am on Tuesday, are said to still be within the academy.

A dependable source inside the barracks informed correspondents that security architecture has been breached inside and around the barracks to halt the bandits from eluding with the abducted officers.

‘The experience was a horrible one, they took advantage of the time when many people had retired to bed to invade the barracks.”

‘Presently, the entire barracks is under lock and key and security has been tighten so that the criminals would not escape the barracks… No doubt, they are still within barracks,’ said the source.

An officer who was wounded in the invasion is currently receiving treatment at a hospital within the barracks.

According to the source, there are, however, worries that the bandits may decide to execute the officers in a bid to escape.

Efforts to reach Bashir Jajira, the Academy Public Relations Officer, Major proved abortive as he did not respond to calls.