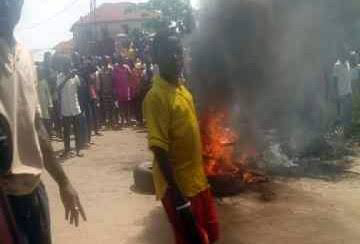 He looked like a thief and walks like one too. I saw him approached my store and I suspiciously kept  watch; but few minutes after he left my store, I couldn’t find my phone.

Not losing any second extra, I raised an alarm for help before he was gone to the busy streets.

Swiftly and eagerly, the local jungle justice a.k.a the anti-corruption group  caught up with him and he was laid to flames almost immediately,

“LET HIM BURN TO ASHES” every one including me said.

Yes ! He’s a thief;  but as the flames trimmed down, my little baby of about five walked towards me  “mummy you have a call” she said; and there in her hands was my phone.

Oh ! I couldn’t believe my eyes,  was that  my  phone in my daughters hands ?

Don’t tell me  I just murdered an innocent fellow.

How could I let this happen?

I thought he took my phone for real.

How do I even start to explain myself to the local jungle justice? and;

What words do I put forth ? I would definitely be killed too  because ours was still an “eye for an eye” but I can’t die now, at least not now.

Hey you there,  was the  shout I heard from behind me. So your phone isn’t actually lost, right? Why did you lie he asked

I will pay you😭  if you promise not to let the cat out of the bag I shouted in return. Please I promise to do your biddings,  you just name your price and I will do my bit🤝

My price could be priceless you know, said the intruder  leaning against a wall but what if I want you ????

How do you mean sir?

Could your price be plenty of money ?

Infact here is even a little cash, you can have it all to your self.

My price could be priceless you know. he said  the second time and of course now  I was scared because his voice was firm.

What if I want to eat  of you, would you resist ? He asked

No ! I won’t,  I Shouted ! without quite  understanding his statement and now I’m his slave. I actually did ensalve myself with my own act and mouth.

The contract wasn’t for a short period, so I had no choice but to heed to his biddings  because I couldn’t afford to die young.

Yes ! It’s was my choice,  but a pain-choice

I will bear my cross myself,  although this  was a contract of benefits but  he gained more;  as he eat from my honey pot against marital grounds, collected cash at free will  also with a  threats to tell,  paraventure I should change my mind.

I caused it all