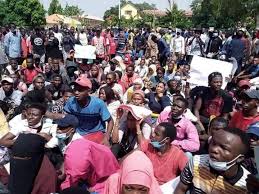 A student of Kaduna state college of education, Gidan Waya has died from gun shot injuries during a protest against    School fees hike in the state.

The real source of the stray bullets is yet to be known but rumours on ground says it was police who shot at the protesting students in order to put fear on them.

The Kaduna state government had wanned against any protest against the general  increase in school fees for all  state owned tertiary institutions.

Kaduna state university student union had protested the hike but the School was shut down in order to force the hike on students.

The union later had a meeting with relevant stake holders which led to the re-opening of the School without revert or reduction on the over 500% increment.

Presently in Kaduna state university, all students are required to make their parents/sponsors  to sign an undertaken against any protest of their child/beneficiary. The undertaken document contains an agreement that any student who protest against the hike should be expelled from the school.

Police in the state is currently investigating the cause of the student’s death.