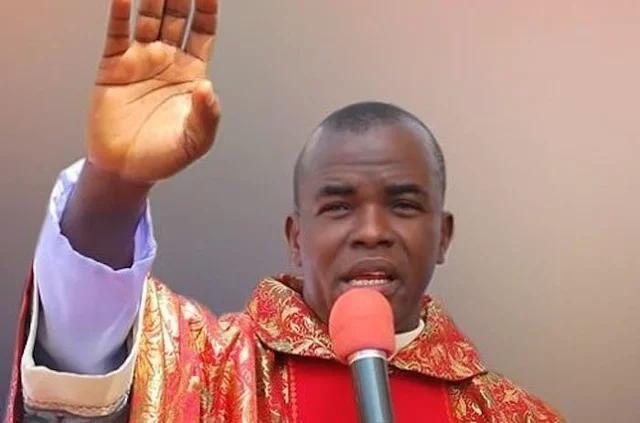 A video from Vanguard news paper shows  members of the adoration ground protesting at the premises of  Enugu bishop. The protesters were seen chanting war song, demanding for the fiery Rev., Ejike Mbaka.

Rev. Mbaka of the Adoration Ministry, Enugu state, has been in the news after he demanded that  President Muhammadu Buhari should resign.

This is after a revelation by the presidency that Mbaka was attacking president Buhari because he was denied a contract.

In a clear statement issued by the President-General of OYC, Mazi Okwu Nnabuike,   Mbaka was last seen on Tuesday 4th, adding that every effort to trace him had being futile.

“We have it on good authority that his aides have neither seen nor heard from him since Tuesday morning.

“All calls put to his mobile line have also remained unanswered; this has now prompted us to issue this alarm as we would not take it lightly should anything untoward happens to him.

“We are giving the Federal Government 48 hours to produce the priest, else they should be ready to face Igbo youths. They were dining and wining with him all along and now that he told the truth, they are no longer comfortable with him.

“Let nothing happen to Rev. Fr. Ejike Mbaka. It will not be in anybody’s interest,” the group warned.

News men reached out to close aides of the Catholic priest, but they declined comment.

“Today is Wednesday and  is the Wednesday programme already. We always hold a programme titled  ‘E no dey again’ today, if he doesn’t appear to officiate, it will then be clear that something is wrong,” one of aids  said.

Let’s keep our fingers crossed in prayers that he returns in good health.