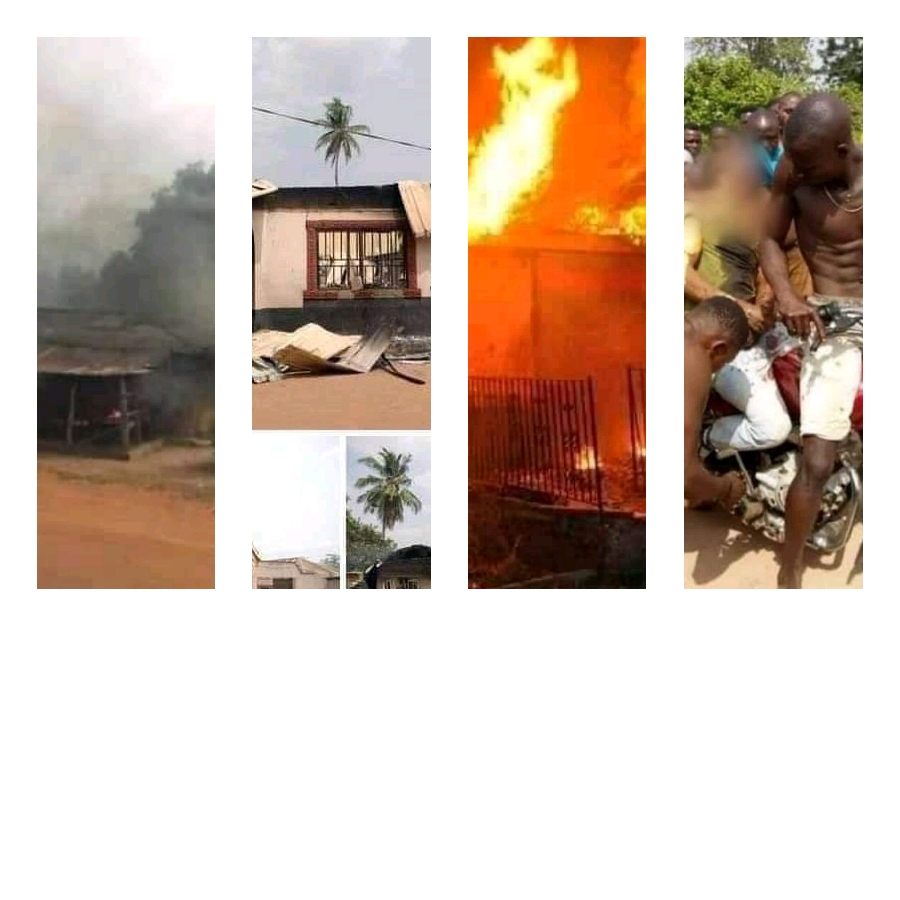 It worries me profoundly that the Nigeria Army has never been able to shake its toga of an occupying force even after 50 years of emerging from under British suzerainty. It gives me sleepless nights that it still sees itself as an alien force on an expedition to pacify the “natives” of the geographical container called Nigeria as exemplified by its habit of routinely burning houses, killing its occupants and destroying economic goods as vengeance against a community where killings of its members occurred.

This tracks with the British Colonial system of embarking on punitive expeditions that involved killings, burning, brutalizing and pillaging against communities in Nigeria wherever any of its colonials were killed or wounded by any member of those communities without any consideration or otherwise of other innocent members of those communities.

The underlying ideology of these expeditions was to terrify the natives into submission and to set examples of how far the British were willing to go to consolidate its rule. Examples abound in Nigeria colonial history of such expeditions. For time, I cite two. The first instance was when  the West African Frontier Force ((WAFF)the forerunner to the Nigerian Army) was set upon Benin on 9 February 1897 to avenge the killing of  Acting Consul General James Philips and most of his Askari Soldiers who defied the Oba’s entreaties that foreigners were not allowed by law to enter Benin territory during the Igue festival which was then ongoing. Admiral Harry Rawson’s troops captured, burned, and looted Benin City. In this expedition, civilians were indiscriminately set upon by members of the WAFF.  Another example of such punitive expedition was occasioned by the destruction by the Tiv of the Royal Niger Company Trading post in Abinsi, Tivland in 1906. The purpose of the attack was not to dislodge the British or to kill any colonial, it was a reaction against the oppression of the Fulani interpreters, administrators and traders whom the British had erected as the go-between the British colonial administration and the Tiv people.  In all about seventy-six Fulani colonial auxiliaries were killed and about 113 were taken captive in the attack, however, apart from the destruction of the physical structures of the trading station, which was populated largely by the Hausa, there is no record of the targeting of British traders. The British, instead of investigating and ferreting out the culprits, sent the WAFF into Tivland which set upon it with glee in a total destruction that ascended to genocidal proportions. In both examples, the message was well received by the ‘natives’.

The Nigerian  Army that survives the WAFF not only conducts itself as it was during colonial occupation, it like its progenitor, constitutes itself into the judge and jury and thumbs its nose at the legal system with the active connivance of the civilian authorities.  It happened in Odi, Bayelsa State on November 20, 1999, where about 2500 civilians were killed and in Zaki Biam, Benue State, on Monday, October 22, 2001, when soldiers from the 23rd armored brigade of the 3rd armored division of the Nigerian army rounded up residents in Gbeji village for a “meeting,” made them sit on the ground, separated the men from the others, and then opened fire upon the men indiscriminately all under former President Obasanjo’s watch.

Even now such punitive efforts have been ratcheted up under President Buhari, the latest of which is the burning, pillaging and the killing of the people of Naka in reprisals attack for the killing of a soldier by some hoodlum said to reside in that community. Professor Moses Ochonu puts the situation in Naka thus:

CHECK THIS OUT TO CONTINUE READING…

“The town of Naka, in Benue State, which personnel of the Nigerian army burnt to the ground, is ground zero of Nigerian state failure. A failed state is one in which there is no rule of law and the armed forces are so lacking in discipline that they are not only incapable of protecting citizens but are also complicit in the sense of insecurity that pervades the society.Residents of Naka have suffered repeated attacks from armed herdsmen. The army’s presence in the town was supposed to repel these attacks and assure the residents.One soldier is reported to have wandered off into a farm, where some residents, suspecting him to be a camouflaged herdsmen militia member, lynched him.Instead of arresting the culprits and handing them over the police for prosecution, soldiers invaded the town shooting and burning. The town is now deserted because the surviving residents how to face two threats, one from armed herdsmen and the other from vengeful, undisciplined soldiers.When citizens can no longer rely on soldiers, the last buffer against insecurity, to protect them against armed marauders, anarchy has set in.”

It could be understood that within the tenuous colonial ecosystem punitive expeditions were absolutely necessary for the survival of the British colonial administration but what rationale could one advance for this behaviour of the Nigerian Army? Does it need this for survival? Does the government it serves have a tenuous hold on the Nigerian populace? Does it think the Nigerian people do not regard it as one of the legitimate dispensers of legal coercive force in Nigeria? Does it need to pacify the natives into accepting of their fate as Nigerian citizens?  If it has none of these rationales then why does it still work with the script written for it by the British Colonial Administration even more than half a century after self-rule? What happened to investigations or allowing the legal system to work? Is the Nigerian Army now above the law?

And what kind of a country is Nigeria really if we can’t begin to reorientate our soldiers to see themselves first and foremost as our protectors and not our enemies? Bloody civilians!

The Nigerian Army should  do well to imitate Britain,on whose teats it suckle, and practises in other parts of the world, by following the rule of law. For example,  In 2013 a British soldier was killed in Woolwich, Southeast London. The British military did not embark on any punitive expedition against the people of Woolwich, rather they allowed the legal system to do its work and bring the culprits to book. On October 22, 2014, at Parliament Hill in Ottawa, at the Canadian National War Memorial, one Michael Zehaf-Bibeau fatally shot Corporal Nathan Cirillo, a Canadian soldier on ceremonial sentry duty. This again did not trigger any punitive expedition against Michael’s community. Instead, the legal system worked as it should be.