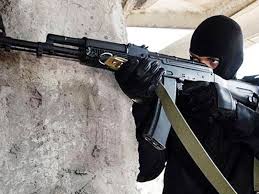 Police Area Command in  southern Okigwe, Imo State has been attacked by gun men. The headquarters is located  in Orieagu, Ehime Mbano Local Government Area of the state was attacked by the unknown gun men who overpowered the officers on duty leaving five of them dead.

The gunmen stormed the police facility around  7p.m. and started shooting sporadically,  aiming at officers on guard. They released several suspects in police custody.

Investigation gathered that the poloce armory was looted in the process of the attack.

All  residents ran helter-skelter, taking shield. Many where caught inside during the attack and   remained indoor till the attackers left.

Orlando Ikeokwu who is the Police Public Relations Officer confirmed the attack. Orlando said five officers have been killed, while one is missing. Ikeokwu stated that the building was not sef on fire as at the time of this report.