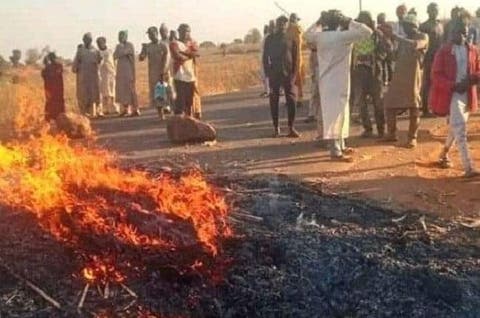 Youths, old and young in Dandume Local Government Area of Katsina State, Nigeria took to the streets on Saturday morning to register their displeasance of the incessant killings and insecurity in the area and Nigeria at large.

Protesters in their hundreds created  blockade along the Funtua /Birnin Gwari popular Road which led to gridlock as commuters spent several hours with no vehicle comming in or out.

It was gathered by our source that the angry protesters were majorly youths from Ilala,  Mahuta and Kadawa village of Dantume.

Eye witness saw the  protesters  holding dangerous objects and were calling on President Muhammad Buhari to come to their aid  and liberate  the state from these frequent attacks.

One Mr. Abubakar who is an eyewitness stated  that the youths from the communities were angry as a result of  an attempt to kidnap some people especially women and children in Kadaw and  Ilala communities.

He narrated that the vigilantes in these communities was galant and able to have repelled the attack launched by the attackers on Friday night.

According to Abubakar, the vigilantes were only holding Dane guns but were able to defend the community.

He said by God grace they  were able to free those earlier kidnapped by the attackers. According to Mr Abubakar, the vigilantes chased  the gunmen to their hideout.

Abubakar Dandume remarked it was this development that ignited the protest.

About 80 Islamiyya children from the area were set free by the vigilantes and volunteers in the area who relentlessly invaded the dean of the kidnapers.

After the rescue, soldiers  and police both claimed responsibility.