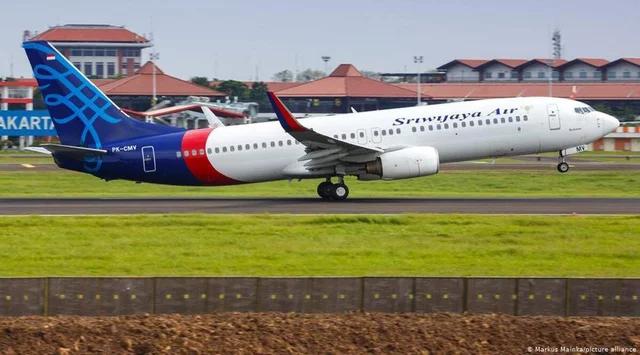 An Indonesian airline has been reported to have crashed down to the sea. The airline jet, Boeing 737 lost contact with the air traffic control on Saturday after taking off. The  flight tracking data showed that the plane plunged into a steep dived several minutes after the take-off.

It has not been cleared  how many passengers and the crew were aboard. The airline is Sriwijaya Air’s Boeing 737-500, which has a passenger capacity of at least  130.  The airline  left Jakarta’s Soekarno-Hatta international airport and has gone within the area of the deep sea before it crashed into the ocean.

Though about  62 passengers and crew were listed on an unconfirmed report of a manifest and this includes  seven (7) children and three infants, a local media reported.

The usual flight duration is around  90 minutes over the Java Sea that is  between Indonesia’s Kalimantan and Java island, the country’s section of  island called Borneo.

The data extracted from  FlightRadar24 shows  the plane reached an altitude of almost  11,000 feet  which is equivalent to 3,350 metres  before sliding  to 250 feet. It then lost contact with the air traffic control.

“Sriwijaya Air flight #SJ182 lost more than 10,000 feet of height in less than one (1) minute, about 4 minutes after it departure from the airport,” the tracking agency said on the  official Twitter page.

A popular broadcast, Kompas TV however quoted local fishermen to have said  they had found debris close to area of the islands just off the coast of  Jakarta, but it could not be instantly confirmed if it belonged to the said missing jet.

Transport ministry of Indonesia said it is currently probing the incident.

“A Sriwijaya (Air) plane from Jakarta to Pontianak on Borneo island with a call sign number SJY182 has lost contact,” said  spokesman Adita Irawati for the ministry

The said  budget airline  which has about 19 healthy Boeing jets that usually fly to destinations in Indonesia and Southeast Asia, said only that it was investigating the loss of contact.

The  search and rescue agency of Indonesia and the National Transportation Safety Commission were also investigating, the spokes man said.

Some time October 2018, 189 passengers were killed when Lion Air Boeing 737 MAX jet crashed  into  Java Sea within  12 minutes after it  took-off from Jakarta on routine one-hour journey.

Indonesia’s aviation  has long suffered from low reputation for poor safety. Her airlines were once banned from entering United states and European airspace.