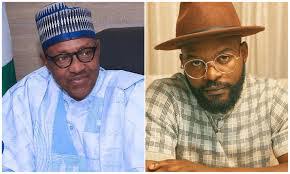 Following the goodwill message of president Buhari to the president elect of United state of America, several public figures has come at the president due to violation of human rights during the endsars protest. The protest was reported to be hijacked by government security personnels who shot live bullets at the protesters. Several people lost their lives during the shooting at the scene.

The statement reads, “Who typed this? Because you clearly know nothing about respecting the will of the people“.

Falze was one of the leaders of the End SARS protesters.