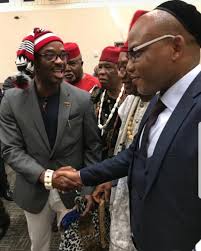 Leader of the proscribed Indigenous People Of Biafra (IPOB), Nnamdi Kanu has arrived Japan to present the Biafran struggle.

Naija News understands that the Biafran leader made this known in his tweet on Saturday morning.

In his tweet, Nnamdi Kanu maintained that his arrival in Japan is not unconnected to maintaining the diplomatic momentum of the most resolute activism to restore Biafra.

His tweet comes in just few days after the IPOB group revealed that it was approaching the United Nations (UN) over the Biafran struggle.

In his tweet, Nnamdi Kanu says as thus; “Thanks to Elohim, I’ve arrived in Japan to maintain the diplomatic momentum of the most resolute activism to restore Biafra.

IPOB will continue to appear openly in places Jubril/Buhari and his handlers were too terrified to thread.

I will address Biafrans at 2 pm Biafran Time.”