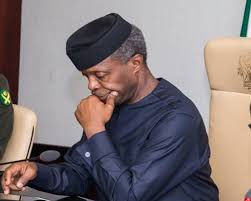 From within Aso Rock, words got out on Friday that the powerful cabal around President Muhammadu Buhari has concluded on forcing embattled Vice President Yemi Osinbajo out of office.

Despite the fog of uncertainty surrounding the fate of Osinbajo, nothing concrete is yet be traced to the president regarding the future of his deputy with whom he had shared a warm relationship since their joint victory in 2015.

But the president’s men are said to be unrelenting in their pursuit of an agenda reportedly aimed at abruptly ending Osinbajo’s presidential sojourn.

Amidst all these, the vice president, on Friday, in Ekiti State, accused insiders whom he described as fifth columnists of working against the interest of the government.

In weeks ahead, one major battle Osinbajo may have to fight is preventing corruption tar from leeching on him as allegations of corrupt handling of government agencies under him may soon hit the airwaves.

To a devastating effect, the administration has employed the anti-corruption campaign to uproot perceived enemies within the government.

Apart from Walter Onnoghen who was sacked from office as the Chief Justice of Nigeria for alleged failure to declare five domiciliary accounts belonging to him in his asset declaration form, the immediate past Head of Service of the Federation, Mrs Winifred Oyo-Ita was also relieved of her position on Thursday over an alleged corruption probe.

Aftermath her open clash with the powerful Chief of Staff, Abba Kyari, at the exco chamber in the Villa over the controversial return to office of fugitive Abdulrasheed Maina of the infamous Pensiongate, many within the system were counting days for her before being sent packing.

It was also predicted that allegations of corruption would be used in getting rid of her.

Both predictions came to pass and were accurate.

Maina, a former chairman of the Presidential Task Force on Pension, who fled the country and was declared wanted by the Economic and Financial Crimes Commission (EFCC), was smuggled back into the country and into the civil service in October 2017, triggering a national outcry.

On camera, an incensed Oyo-Ita was seen wagging her fingers in the face of an equally angry Kyari. Both eventually made up before the camera.

With the sack of a former Director-General of the State Security Service (SSS), Lawal Daura, Kyari is believed to be the face of the presidency cabal, though two other powerful figures (names withheld) not in government are also said to call major shots.

Beyond the drama of the past week within the presidency, which has seen Osinbajo in the eye of the storm regarding his continued relevance in the administration’s second term in office, Saturday Tribune was informed by a well-placed Villa source that names were already coming up as possible replacement for the vice president.

Topping the list of those being considered is said to be a popular pastor for what is deemed an appropriate replacement and balancing.

Osinbajo, aside from being a Christian, is a pastor of the Redeemed Christian Church of God (RCCG) and an ally of the denomination’s influential general overseer, Pastor Enoch Adeboye.

Although other names are reportedly being bandied as his possible replacement, the said pastor appears to fulfill all the requirements, being also a Christian, a popular pastor and equally from the south-western part of the country like the vice president.

It was further learnt that those who want to see the back of Osinbajo are considering two major exit strategies: either his forceful resignation or impeachment through the National Assembly.

A source around the vice president said his in-house traducers are already seeing him to be toast with the conviction that it may not be too difficult forcing him to resign when brought under pressure.

Osinbajo’s lack of meaningful political structure outside of Senator Bola Tinubu’s is likely emboldening those seeking to rid the presidency of him.

The vice president’s major sin for which he has reportedly not been forgiven, according to an insider source, is beyond the actions taken when the president was hospitalised in the United Kingdom.

As the acting president, Osinbajo saw to the Senate confirmation of Justice Walter Onnoghen as the nation’s substantive Chief Justice, though Buhari eventually got rid of him through a controversial suspension following an alleged failure to declare all his assets as required by the law.

Onnoghen, the first southern Christian CJN in over 28 years of northern domination, was replaced with Justice Mohammed Tanko.

Osinbajo also got the controversial erstwhile Director General of the SSS, Daura, fired following a siege to the National Assembly.

Daura has been seen around the seat of power since Buhari assumed full duties.

However, the public denial of the much-despised Ruga policy of the Buhari administration by Osinbajo, following a national outcry, is said to have been the deal breaker for the presidency cabal.

The back-and-forth between the vice president’s office and the Myetti Allah over Ruga and the insistence by the former that Ruga isn’t the same as the National Livestock Transformation Plan (NLTP) against the position of the latter further mobilised national and international outcry against the policy.

Buhari’s administration later succumbed to the global condemnation and scrapped the idea, which was aimed at having strictly Fulani settlements in local governments across the country.

The cabal, according to information available to Saturday Tribune, is holding Osinbajo responsible for the unnatural death of the Ruga agenda, believed to have been packaged by the administration to favour the Fulani stock of the president.

Despite the decision by nearly all northern governors to buy into NLTP as against Ruga and with Osinbajo being actively involved, the party is reportedly considered over for him in the current power project, hence the resolve, according to available information, to kick him out.

A political associate of Osinbajo told Saturday Tribune he didn’t see any big deal in the alleged raw deal coming the way of the number two man.

When asked if he had discussed the current realities with the vice president, he said he could only volunteer an opinion when asked.

Osinbajo has been variously accused of sidelining many of his associates while only relating closely with those who are of the Redeemed church.

A senior lawyer had told Saturday Tribune of efforts he made to see the vice president for a serious national issue only to realise that none of the appointments given him materialised.

There is also a perception that the chairman of the Federal Inland Revenue Service (FIRS), Babatunde Fowler’s recent query from the Villa was part of the assault against the camp of the vice president, considering their long-running friendship.

Osinbajo’s name has featured frequently and prominently in the 2023 presidential permutations and many commentators, pressure and political groups from the North have said 2023 should not be an exit point for the zone.

The vice president is yet to make any comment about running for president.