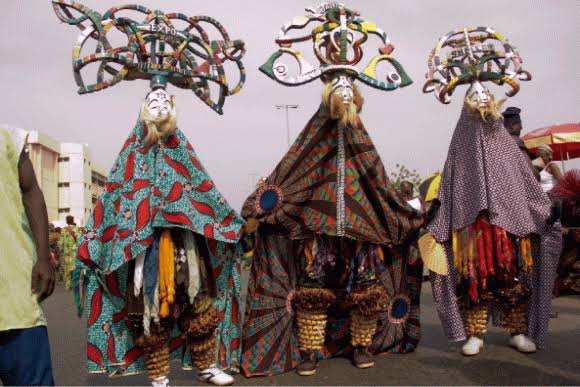 Owoicho is always looked upon as OWONOFIYE or OWODUDU, that’s almighty and Omniscient. But since He is too physically removed from the physical world, just like other beliefs: Hebrew, Greek etc there is need for intermediary. It is now the Chief priest or the OCHE who act as the intermediary between mankind and the supreme God, Owoicho as the Oche is the ruler of the community.In many Idoma cultures, the Oche is also the chief priest of Idoma religious cults and in some circumstances Oche is different from the chief priest. Idoma worships  Owoicho (The supreme God)- Aje (The outstanding Earth)- Alekwu (Ancestral Spirit)

In 1981, Prof Erim state that the owoicho is a personality that exist beyond the physical.

Aje: The Aje is so important to the Idoma religious belief that Each kindred group established on Earth shrine within its OJIRA (gathering) and in most cases the chief priest of the Aje is the Oche. In this Capacity he is referred to as the ADALEKWU (father of the dead). In Idoma belief, the dead members of the kindred were paradoxically alive. In other words, death did not remove the dead from the kindred membership.

When an Idoma person dies after living a morally sound life, died at ripened age and has been giving a complete funeral rites, he or she transmigrates and joins the communion of ancestors owing to the belief that ancestors are the closest to the living out of all spiritual realities in which the supreme being Owoicho can be reached. The Alekwu ancestors are known as the living dead because of the physical cessation of life and the continuation of life in the sprit realm. With this we can come to conclusion that Idoma people believed in the immortality of the soul as the Greek philosopher Socrates.

I can boldly classify Alekwu into

The Alekwu Oche is what was just discussed, the soul or spirit of the person that survived and carry on after the death of the person either on this Earth or in the spiritual realm.

Alekwu Aje: The God of Idoma from the Onset is Owoicho, there was never conflict between Alekwu Aje and Owoicho until the coming of modern religion.  Alekwu Aje is said to be a sacred and vengeful against all forms of profanities of the  cultures of the people. Alekwu Aje feast of annual remembrance is a traditional religious feast where practitioners communicate spiritually  and makes sacrifices in worship of their ancestors across the land.

Inspite of westernization that brought about christianity presently dominating the belief base of idoma people, the celebration of Alekwu  at the beginning of February or March in places like Adoka, Ugboju and Otukpi while in places like Orokam, Otukpa and Owukpa stretches to July and August is till date a great feast.

The Alekwu maintain ethics, justice, peace, respect and dignity for each other, but with the advent of Christianity and Islam many are fast these days to accuse of decay of the Alekwu proclivity on foreign cultures.

Alekwu according to the beliefs of idoma people, it is capable of rewarding and punishing obedients and violators of the norms of the land. According to the tradition,
a woman of any  ethnicity  is automatically subjected to The oath of The Alekwu  when she  marries a man of idoma origin. Alekwu chastises unfaithful woman by causing unexplained circumstances to work against members of the offending family. In  another belief, when a male in idoma land commits incest, he would likewise incur the wrath of Alekwu, except he confesses and right rituals be performed to pacify  the spirits. In same cases of unfaithfulness, the chastisement fell on the wife until she confess and if the husband is aware of the unfaithfulness and attempted to conceal the act, he automatically becomes the victim, and if no ritual rites is carried out with confession can eventually lead to sudden death. (ONE HAS TO BE CAREFUL, MANY ARE GONE THROUGH THIS ACT).

Also in a case the husband is innocent, the first born son became the victim. Absent of confession from the wife and mother of the son, the son dies, in most cases seven days warning.

Alekwu Affia is popularly said to  represent the souls of the spirit of the anceators in physical form. It couold be in form of  man or masquerade. It is also a funeral ritual representation of the dead during which the spirit of one’s deceased parents is appeased by preparing a special masquerade, which represent the reincarnated deceased person. It comes up when necessary and it stays three days. Alekwu Affia or  Eyanokwu, or Ogrinya, also known as, Ewunokwu masquerades. Always  appear united in the night. It also appear during the death of a king  (Oche) and districts heads. The masquerade  act as an anchor and director to escort the spirit of idoma kings and chiefs  to the land of the death (Ekwu bu Inu and Ekwu bu Eche).