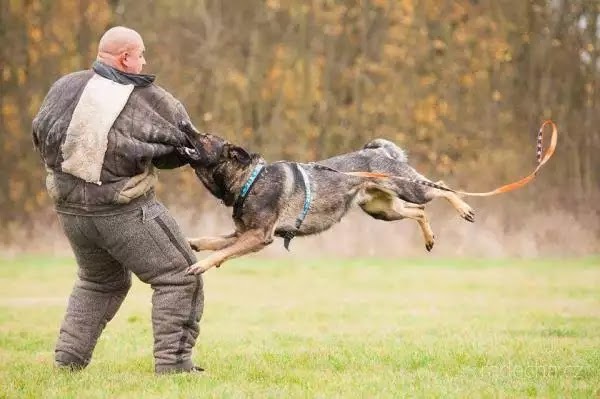 Dogs are one of the animals that are friendly to human but could be an epic enemy in some conditions. when dogs happen not to be use to you, they reacts like real enemy and advances to attack you. Dogs are human friends but can be used as security against fellow human, depending on the specie of the dog and the training.

There are different aims why men keep dogs at home. Some are used as pets, companion while others are for security. Dogs trained for security purposes are most aggressive and can be deadly if not handled with wisdom.

Over the years, dogs have killed many people as a result of inability to manage the attacks wisely. Reasons Why dogs attacks human includes:

Dogs usually bark and attacks strange people around the house. Security dogs are known for attacking almost every one that is not a member of the family or strangers who are not regular vistors. Such attacks can be extreeme when no member of the family is around to call the dog to order.

If you eat dog meats

Research conducted over the years shows that people who eats dog meats are more susceptible to attacks from dogs. Reasons behind this is yet to be scientifically proved but many have attested to the findings to be true.

In parts of Africa, it is believed that some dogs have the ability to detect who does have an evil thoughts against family members. When your dog keep barking at your visitor in an unsual way and refused to stop even while calling her to order, it means the person might be having an evil thought.

Dogs have high olfactory lobes, an organ responsible for perceiving scent, aroma, or odour. This is why dogs that are trained to detect drugs can be very efficient. Usually, if a person is in possession of harmful drugs, such dogs barks excessively when it is detected. What about attacking people with drugs? Dogs does that too.

Many species of dogs knows and can detect who is carrying arms. When detected, such dog reacts and advances to attack the bearer of the arm.

How to escape dogs attack unharm

The following points are ways you can escape dogs attack without being harmed:

When a dog is barking and advancing to attack you, do not run, stand still no matter how your heart is sinking. I know it sounds crazy but believe me, you will go from there unharmed if you can apply the other points bellow.

2. Pretend you are a family member

Dogs have memories but human senses can always outsmart every other animals. As you keep standing, make whistle sounds with your mouth and pretend to be calling the dog. If you have ever called a dog with sound of your fingers and palm before, then you can add the two sounds together.

3.walk towards the dog

No matter how aggressive the dog is sounding, don’t panic, take a step at this point and walk toward the dog while making the two sounds with your mouth and that of your fingers and palm.

4. Grab between the neck and head segment of the dog and give her a friendly robs with your 4 fingers.

The best way to finally calm a dog down after you didn’t run is to advance towards the dog, make those sounds and try to romance the neck of the dog. At this point the dog will calm and then start waving her tail for you. Wow, finally you are a friend!

Note: you are at advantage when you know the name of the dog. If you do know the name, you can call the dog by her name while you are still standing. Keep calling the name with those signs while trying to advance towards her also. The best time to take a walk towards the dog is When you notice a calm and a wave of her tail. Do not make a move while the tail is still standing.